Roy has avidly read Discworld books since the days when Terry published two a year. He has been a DWCon-goer since 2006 and in that time has had fun entering the Maskerade, first as Willikins, then as Ptah R'gemini and then more recently as the Bursar. (With Mr Spoon.). Prior to that his only experience on stage was at school. In the 1960s. He enjoyed it so much that he has now been in several DWCon and IDWCon productions, as well as running a Guild and working in Ops. In real life he appears to be a kindly old gentleman, to whom a maiden mght quite safely proffer a glass of small beer. 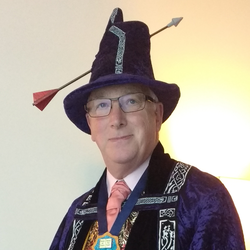