After a break to be DWCon Chair in 2014 and then lurk with Tech in 2016 and 2018, John has returned to Productions where his love of am-dram and his experience of writing, directing and performing could be used to full effect. As Head of Productions for the 2008-2012 conventions, John was responsible for staging "Moving Pictures", "The Rocky Horror Discworld Show" and "Eric" along with numerous sketches for Opening and Closing Ceremonies. John's proudest moment was when Terry Pratchett asked him and Pam to write and sing "Fairytale of Ankh-Morpork".

And yes, he is that Dr Hix. Buy him a beer and he'll tell you how that happened. 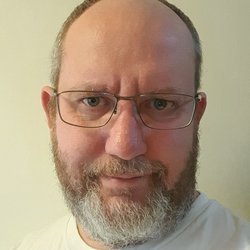